In my research, I am interested in the high-redshift Universe. I run large, hydrodynamical, cosmological simulations to study the first stars and black holes. I am further interested how these numerical results relate to observations, like the 21cm signal or the Ultimately Large Telescope.
My long-term goal is to understand the influence of first star formation and streaming velocities on galaxies at the epoch of reionization, and on local dwarf galaxies and globular clusters.

Please find a full list of publications here: ADS
(12 refereed publications, 8 of them first author, with 176 citations in total, h-index of 6 as of November 2020)

A selection of research projects is shown below.
The Ultimately Large Telescope
https://arxiv.org/abs/2007.02946 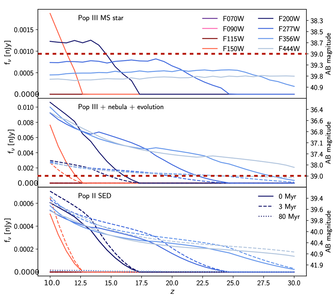 Expected flux for our fiducial model with 1000 solar masses distributed over a star cluster in the minihalo. Both Population III star models allow observations with an AB magnitude of 39 in the F200 NIRCAM filter.
We investigate the basic properties of the Ultimately Large Telescope - a telescope that would be able to observe the first stars. In our study, we derive the flux limit the telescope must reach, based on three different stellar models. We chose a lognormal distribution of total stellar mass in a minihalo with a fiducial value of 1000 solar masses. We find that we need to reach an AB magnitude of 39 in the F200 filter (in the near-infrared), assuming JWST NIRCAM filters. The number density of sources is very high and a small field of view will be sufficient, and sources will not be contaminated. These telescope requirements can be met by the Liquid Mirror Telescope proposed by Angel+2008, with a 100m diameter telescope and a liquid, rotating mirror on the moon.

This publication has been featured in the news, e.g. by USA Today  or vice.

The influence of streaming velocities and Lyman-Werner radiation on the formation of the first stars
https://ui.adsabs.harvard.edu/abs/2020arXiv200805663S/abstract 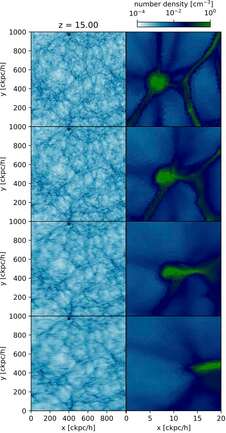