Hi Visitor!
My name is Anna T. P. Schauer. Welcome to my webpage. 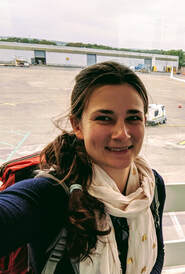 I grew up in Munich, Germany, where I completed my bachelor’s in physics in 2012 and two masters’ degrees in physics and astrophysics in 2014. My early research in the group of Andi Burkert focused on simulated elliptical galaxies. For my PhD, I moved to the star formation group of Ralf Klessen and Simon Glover at Heidelberg University. After defending my PhD thesis in October 2017, I stayed for an transitional postdoctoral position in Heidelberg.

I started as a  Hubble fellow at UT Austin in October 2018, working with Volker Bromm. My research focuses on the formation of the first stars. With hydrodynamic simulations, I study large-scale effects that influence the early building blocks of galaxies: minihalos. By investigating these first objects, I aim at understanding how the Universe underwent the transition from metal-free to metal-enriched. As a Hubble Fellow, one of my goals is to study the combined effect of the large-scale Lyman-Werner radiation field and the relative motion of baryons and dark matter imprinted from recombination, which both delay the formation of the first stars. I will further investigate how the ionizing radiation of these first stars and the spread of metals from the subsequent supernovae can enrich the environment.